For years it has been said and joked that Russia could benefit from climate change…open shipping routes, longer growing seasons, and the availability of space and water for increased agricultural production. These ideas have permeated the Russian public, and Putin has even questioned if it was necessary to further reduce greenhouse gas emissions. However, this past summer Russia received a wake up call. Lasting over a 2-month period, hundreds of wildfires ripped across 7 regions due to extreme heat, while 28 others where left in a state of emergency as a result of failing crops from intensified drought.

The summer’s heat wave that brought Moscow’s temperatures to 130 year-high (in excess of 100 degrees), has illustrated the limitations of thinking that all can be well in a climate-changing world. The drought destroyed about 25 million acres of crops, and led to intense wildfires that resultantly conquered entire villages. Burning peat fields filled the air with pollution, and left a dark haze over Moscow and the surrounding areas. As a result of this, and other climate-related production declines, wheat prices rose about 90% . Image 1: Russian Fire

World wheat supplies were sharply reduced as a direct effect of the droughts. The supply was 6.6% smaller that in previous projections and prices (1). The crop shortage exacerbated the economic and health turmoil that was already being felt during the heat wave. As fire and drought are now occuring more grequently, climate change experts are concerned that rising temperatures will threaten food security. Russian deputy economy minister, Andrei Klepach, remarked that the drought would take up to 0.8% off of the year’s economic growth (2).  This figure equals about 313 billion roubles, or roughly $10.1 billion.  However, the annual growth rate was not the only thing that was slowed. Weeks after the fires first broke out, consumer prices in Russia rose by 0.4% (2), the same increase that was seen during the whole month of July. According to Klepach, the August inflation rate was at about 0.5% at best (2).
The agricultural sector experienced a significant cascade effect, as dairy farmers had no choice but to start killing off their cattle, due to explosive fodder prices that they could not afford. The agricultural ministry estimated that the sector lost billions of roubles, as more than a quarter of the crops had been burnt. Due to fears of shortages, food prices also exploded, and despite a ban on exporting grain, basic products such as bread and milk became much more expensive then they were prior to the fires. It had also become increasingly difficult to buy buckwheat, a staple food ingredient among most Russians. This was the result of a poor harvest, as well as a higher demand due to consumers’ desire to stock non-perishable food (a result of panic-buying due to the fires). 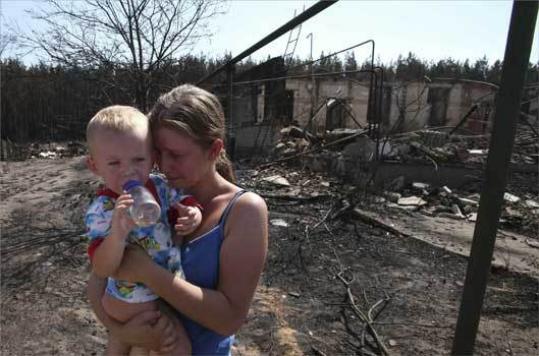 The rising amounts of droughts have also caused an increase in sickness and death rates due to growing amounts of dust. Pollutants such as aerosols, ozone, and bacteria were spread long distances, and led to a lack of clean water for drinking and sanitary purposes. The fires have also led to the destruction of houses, industrial plants, and electric power networks. As these problems continuously become exacerbated, people will take flight and migrate to eastward and northern expanses of Russia. Here, agricultural and development possibilities may arise due to melting permafrost, and ruined livelihoods could be supported.

Though catastrophic, the results of the fire have the potential to encourage a policy shift from the top of the government. Putin, who has been known to joke about climate change as being good for Russia, admitted “this year we understood here in Russia that climate problems are really pressing for us as well.” (SOURCE) The results of climate change are clearly being felt, however it could be quite manageable for Russia in the coming decades. Adaptation must be a principle priority. Strategies that reduce the vulnerability to future climate change will have substantial co benefits for citizens of the region; stronger infrastructure and stronger institutional support for promoting adaptation will curb the effects of climate change in years to come. The Russian wildfires were several hundred fires that broke out across Russia. However, they were primarily located in the West (surrounding Moscow),where record temperatures were causing the hottest summer in history.

There is no doubt that the climate is changing in Russia. They are facing warming temperatures, a change in hydrology, and weather extremes. Temperatures and precipitation are going to change drastically over the coming decades. Temperatures will increase everywhere throughout the region, with more significant warming in the northern latitudes. The majority of precipitation increase in Russia is likely to occur in winter; hence higher summer temperatures leading to drought conditions.

Figure 4: Depicts the record temperatures that occurred in summer 2010, compared to the previous record highs

Figure 5: NASA satellite image depicting the extent of smoke from the wildfires (in yellow)

Civil: As a result of the forest fires, access to resources (food, land, water, shelter) may be limited.Russia may fall victim to civil strife as new pressures are put on populations to migrate in order to supplement their effected livelihoods.

Low: The Russian wildfires have not caused any violent conflict or civil uprising due to the effects of climate change. The natural destruction that they have casued has hopefully served as a wake-up call to develop new adaptive measures to climate change.

Potential for Conflict Due to Russian Wildfires
Climate Change causes conflict. In the case of Russia, wildfires have great potential to start conflict. This summer, climate change drastically increased temperatures and induced extreme heat waves throughout the country. This in turn caused wide-spread drought, which led to quickly-spreading wildfires in the dry forests. This destroyed a lot of farmland used for producing wheat, and thus the domestic wheat supply fell and prices shot up. Since people feared they would not be able to obtain this staple food, there was widespread panic buying and hoarding. This fight or flight behavior has the potential to start conflict. Secondly, wildfires spread near Chernobyl.  There was fear that clouds from the flames were potential carries of the radioactive materials from the contaminated area. If this were to spread, people would have to be displaced. Forced migration is a common factor of conflict. Lastly, the intrepid heat wives caused an intense spike in demand for electricity. However, the power grids and the operators themselves were unable to keep up with it. Prices soared and there were delays in repairs. If anything, this would cause civil disobedience.

An outcome of dispute implies that a conflict has already been occurring. However, in the case of Russian wildfires, I examined the potential for conflict that may arise from it. Although I have come to the conclusion that the fires have not led to any viable conflict, the continuous warming of temperatures will have an effect on Russia in the coming years. As a result of climate change and warming temperatures, Russian society will be faced with increased hunger and water stress. Though land will become readily available to farm with melting permafrost, the already apparent droughts and wildfires will continue to destroy the crops and hence the livelihoods of the people who
depend on them. People who are dependant on rain-fed agriculture would be forced to migrate due to lack of precipitation or lack of infrastructure (such as homes that are destroyed in fires), and resultantly has the continuous potential to cause conflict between Russians and native people whose land they would be settling.

[4] The World Bank. "A Framework for Developing Adaptation Plans." Adapting to Climate Change in Europe